Air cargo in the OKI region has an extremely safe track record over the past decade. A search of Federal Aviation Administration (FAA)-published accident data on air-related safety incidents was conducted as part of this Freight Plan, which showed only one air cargo-related event. In 2011, CVG reported an incident involving a 747 commercial airplane. No crash occurred and no injuries to crew or passengers, or damage to cargo, were reported. You might question, “Why mention this passenger plane incident in the Freight Plan?” A majority of air cargo transported at CVG is moved by Air Carrier passenger planes. This type of air cargo is called “belly cargo” since it is held in the belly of plane. Most passengers are completely unaware of it, though freight is resting right under their feet. Source: Federal Aviation Administration (FAA), Data and Research. (2010-2020). Accident and Incident Data. [Data set].

Although aircraft have not been causing safety concerns, the air cargo being transported has led to a rise in reports of hazardous material (HAZMAT) incidents. All air HAZMAT events over the past 20 years in the OKI region have occurred at CVG. Between 2001 and 2010, 88 air cargo-related HAZMAT incidences were reported, representing only 5 percent of all occurrences. However, given the rise in CVG air cargo activity, it is no surprise to learn that air HAZMAT incidences increased 342 percent between 2011 and 2020. A total of 389 air cargo-related events were reported, which represented 15 percent of all our region’s HAZMAT incidences for the decade. An examination these incidences show that the majority were caused either by a defect in the product, its container, or by human error during transport, such as mishaps with forklifts, conveyors, and accidental puncturing or dropping of the item by an employee.

FAA regulation 14 CFR § 139.317 establishes certification requirements for airports serving scheduled air carrier operations in aircraft designed for more than nine passenger seats but fewer than 31 passenger seats to ensure safety in air transportation. FAA conducts annual inspections to ensure Part 139 requirements are being maintained. There are 519 such airports in the U.S. and they are commonly referred to as “Part 139 Airports.” CVG and Cincinnati Municipal Airport-Lunken Field (LUK) are the only two Part 139 Airports in the OKI region. As such, they must comply with certain operational and safety standards that vary, depending on the size of the airport and the type of flights available. Below we have listed a few of the safety measures currently practiced at CVG and/or LUK.
Source: Federal Aviation Administration (FAA), Airport Safety. (2021). Part 139 Airport Certification – Airports. 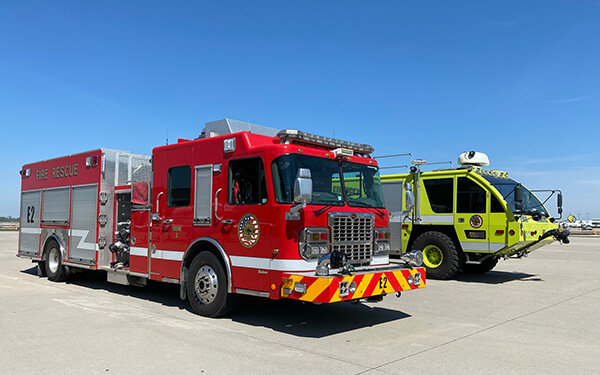 Part 139 requires CVG and LUK to meet a minimum level of Aircraft Rescue and Firefighting (ARFF) equipment and supply standards. ARFF has five levels or indexes in total with CVG held to an Index C and LUK to an Index A. Read more to find a detailed explanation of ARFF index levels and requirements.

CVG and LUK must provide several nighttime air traffic control measures such as runway/taxiway and apron lighting and signage, pavement markings, and airport beacons to be in compliance with Part 139. As such, these two airports are the only ones in the OKI region able to provide air carrier operations at night. Current conditions of runway edge lighting and pavement markers are provided under Runway Infrastructure Condition along with the current status of several other airport infrastructure elements.

Foreign Object Debris (FOD) has been defined by the FAA as “Any object, live or not, located in an inappropriate location in the airport environment that has the capacity to injure airport or airline personnel and damage aircraft.” FOD may be present on runways, taxiways, aprons, or ramps, and can affect an aircraft in a variety of ways including during critical phases of flight, such as take-off. (Source: Federal Aviation Administration (FAA), Airport Safety. (2021). FAA Foreign Object Debris Program)

In the U.S., an airport operating with 300,000 movements per year can expect to spend $12 million per year on the direct and indirect costs caused by FOD and bird strikes on the runway. In 2020, CVG recorded about half this volume, or 113,000 movements. (Source: McCreary, I. (2008). The Economic Cost of FOD to Airlines.)

Movements, or Airport Operations, is a term that represents “Landings x 2” or the total number of aircraft take-offs and landings

Based on the national average, it is estimated that CVG experiences a FOD and bird strike cost of about $6 million each year. CVG and LUK regularly inspect their runways using FOD walks and drives to examine every square inch of surface to ensure the safest travel conditions.