In terms of environmental sustainability, two factors tend to dominate the conversation when it comes to air cargo — aircraft operations upon 1) air quality and 2) noise levels.

Shifts in consumer buying habits have increased e-commerce and thus the demand for air cargo to help meet shorter delivery-time windows. Under these market pressures, CVG has created a very efficient airport system. Runways and other ground infrastructure are designed to minimize aircraft emissions both through shorter taxing distances to and from gates, as well as providing ample storage or parking for aircraft to reduce cueing and idling of planes.

CVG has also begun incorporating hybrid and alternative fuels vehicles to their maintenance fleet. Older boilers have been replaced with more efficient, energy saving models. CVG’s fire crews have converted to cleaner burning propane and aircraft flammability technology like Flame-Tek for use in their Federal Aviation Administration (FAA)-mandated training exercises. 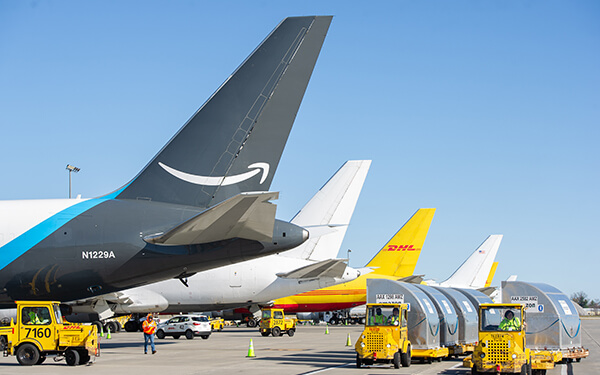 In regards to the completed reconstruction of CVG’s Runway 9/27, lighting improvements made up more than a third of the total project. Runway 9/27 now has LED lights and signs that produce 350 fewer metric tons of CO2 emissions per year than previous lighting. This emissions reduction is the same as the electricity use of 60 average homes per year. The additional bonus of using LED is that the new light fixtures will last about 10 years, whereas the old lighting had to be replaced every few months. The Runway 9/27 project resulted in several other environmental sustainability benefits including:

Just as the FAA regulation Part 139 details safety requirements for airports, Federal Aviation Regulation (FAR) Part 150 covers guidelines for airport noise compatibility planning. Once again, CVG and Cincinnati Municipal Airport-Lunken Field (LUK) are the only two airports in the OKI region that must comply with this regulation, based on aircraft size and volume in operation at their facilities. The FAR Part 150 process is structured to develop two key study products:

Day-Night Average Sound Level (DNL) is the noise metric used to reflect a person’s cumulative exposure to sound over a 24-hour period. DNL is expressed as the noise level for the average day of the year on the basis of annual aircraft operations. The FAA has adopted a DNL of 65 decibels (dB) as the threshold above which aircraft noise is considered to be incompatible with residential areas. Sixty-five dB is described as the noise level for normal conversation at three feet. In comparison, 85 dB represents shouting at three feet and 105 db would be the noise level of a car horn from three feet. In terms of CVG, OKI staff calculated the population impacted by aircraft noise levels above the 65 dB noise threshold using the official 2011 noise contours obtained from Boone County. The results report that 1,050 people or 0.000495 percent of the region’s population are impacted by these noise levels. Read more on the FAA noise policy guidance. 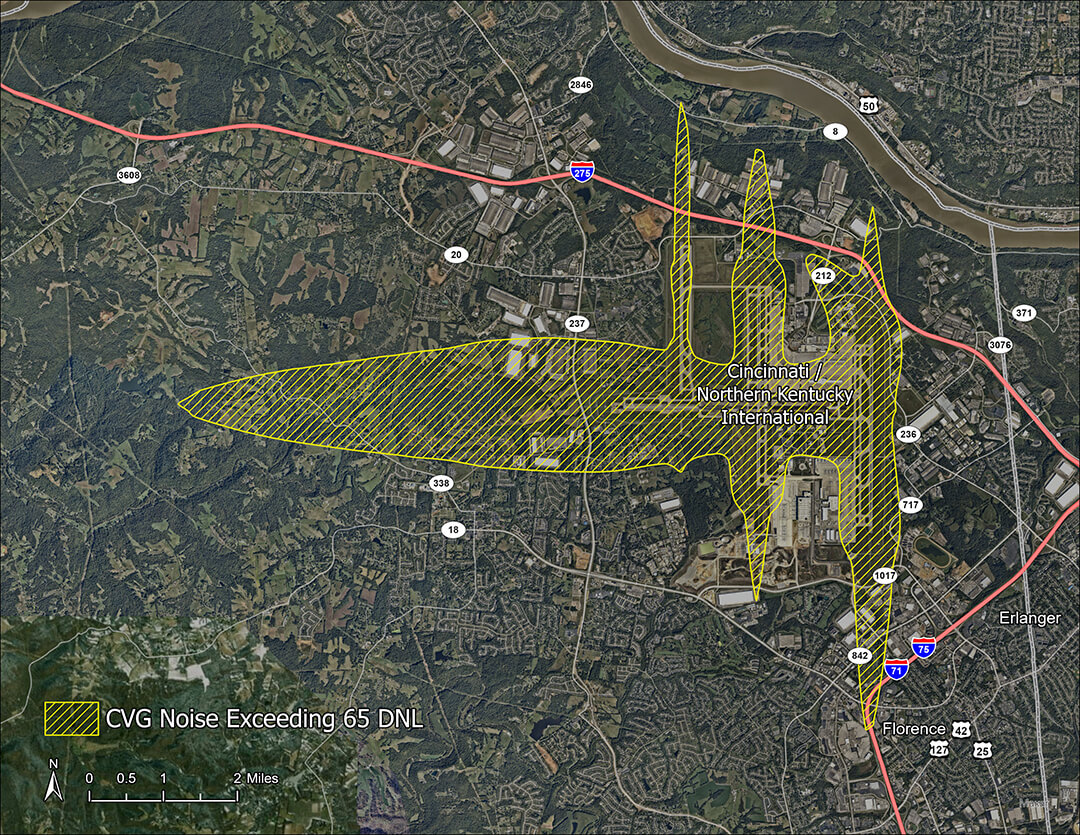 CVG has a longstanding commitment to addressing noise levels and their public impacts. The airport has done this by lengthening two runways, which has redirected the majority of nighttime activity over less populated areas. It has also redesigned departure corridors that keep larger jets from flying over residential areas, as aircraft is noisier on takeoff, when it operates at full power.

CVG uses an industry-leading flight tracking system to monitor aircraft noise compliance and educate the community on aviation noise. To assist citizens in reporting noise concerns, CVG has noise abatement information available on their website. If members of the public experience an airport-related noise concern, they can use the tracking system to help identify the aircraft that may have been the noise source. CVG is then able to investigate the noise concern to see if the aircraft was following correct protocol. CVG also has an online noise form people can fill out and a telephone number they can call to report noise concerns. Lastly, CVG publishes an annual Aircraft Noise Report summarizing the number and types of noise complaints received. (Source: Cincinnati/Northern Kentucky International Airport. (2021). Flight Information, Noise Abatement.)