Air cargo plays an important role in the economic development of our region. As one of three Express Global Super-hubs for DHL and the first Amazon Air Hub, CVG growth is being fueled increasingly and significantly by air cargo. With its impressive air cargo growth over the past decade, CVG has soared in international, North American, and national status as a top cargo airport.

According to Airports Council International (ACI), with a 41 percent increase, CVG topped the list as the fastest growing airport in terms of cargo traffic over the last decade (2008-2018). Overall, CVG is ranked internationally as #21 in terms of air cargo tonnage handled. With a 2020 cargo total of 1.5 million tons, CVG states that it expects to close in on a Top 20 International position over the next few years. Please note, ACI uses a 12-month ending in April timeframe for their international reporting, so their tonnage values for CVG will not match those OKI has received directly from CVG, which are based on a yearly calendar (January through December).

CVG’s steady rise in status as a major player in air cargo is the result of DHL having located their North American Global Hub to CVG in 2009. In 2010, ACI had CVG ranked 15th in terms of cargo landed weight. Today, CVG is the seventh largest cargo airport in North America. CVG’s current ranking is in solid position. As far as further CVG advancement, it will be a while, as Chicago O’Hare International is our next ranking competitor at the sixth position with 1.9 million tons for 2020. As O’Hare’s air cargo volume is significantly ahead, CVG is expected to eventually reach and surpass this volume level; however, it will likely be several years from now. 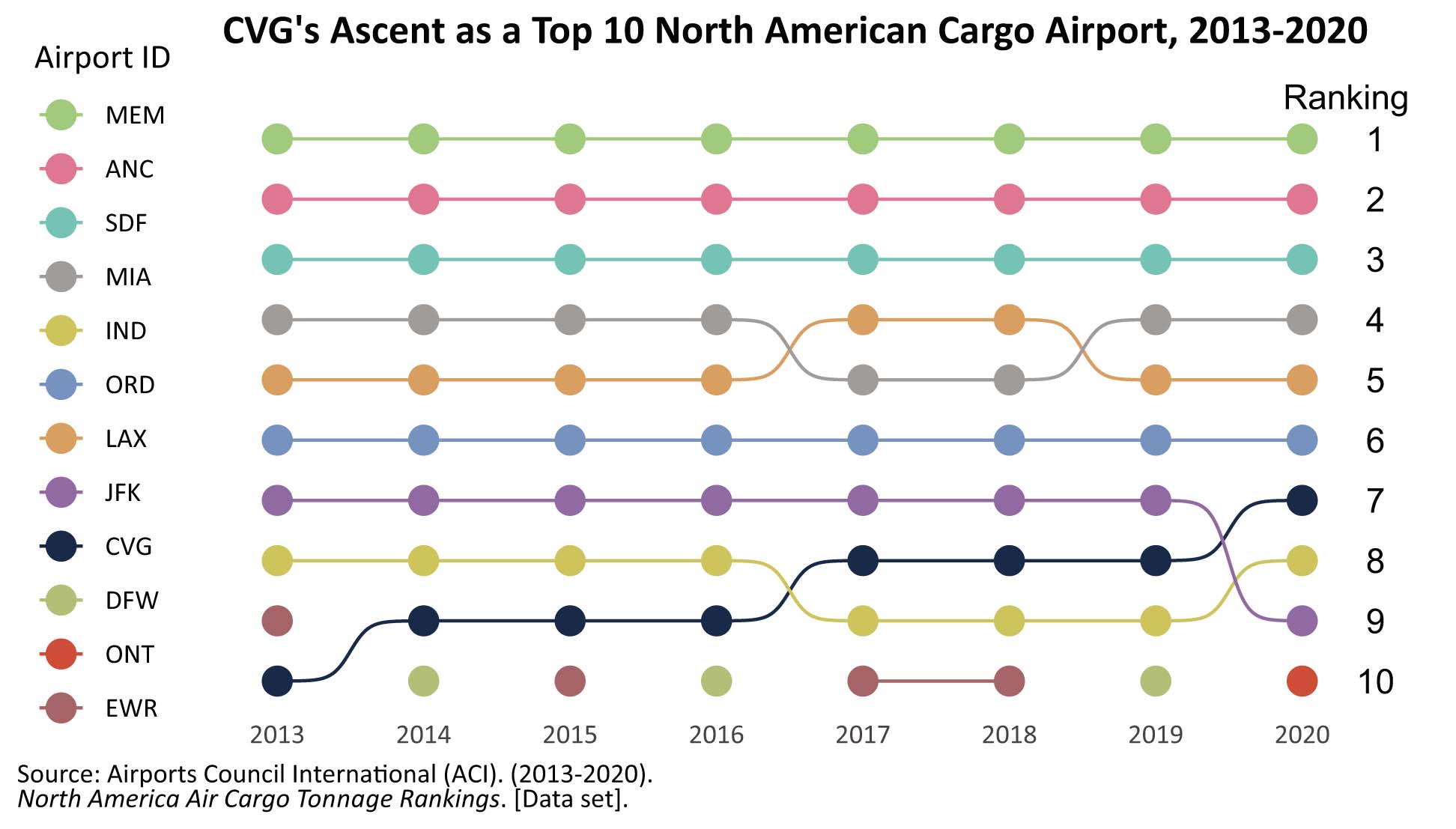 National air cargo airport rankings use Federal Aviation Administration (FAA) Bureau of Transportation Statistics (BTS) data, which is based on carrier reported data required only of U.S. licensed carriers. Therefore, U.S. airports that have a significant number of foreign carriers operating at them, will not have an accurate cargo landed weight reported. This is because it does not factor both their total domestic and international cargo operations. Still, with this limitation in mind, the national comparison shows CVG’s climb in cargo status over the past decade. In the U.S., only CVG and the Los Angeles International Airport (LAX) have risen in top 10 cargo landed weight status. Furthermore, CVG has experienced the highest rise of all U.S. airports moving from ninth to sixth nationally within the past decade. 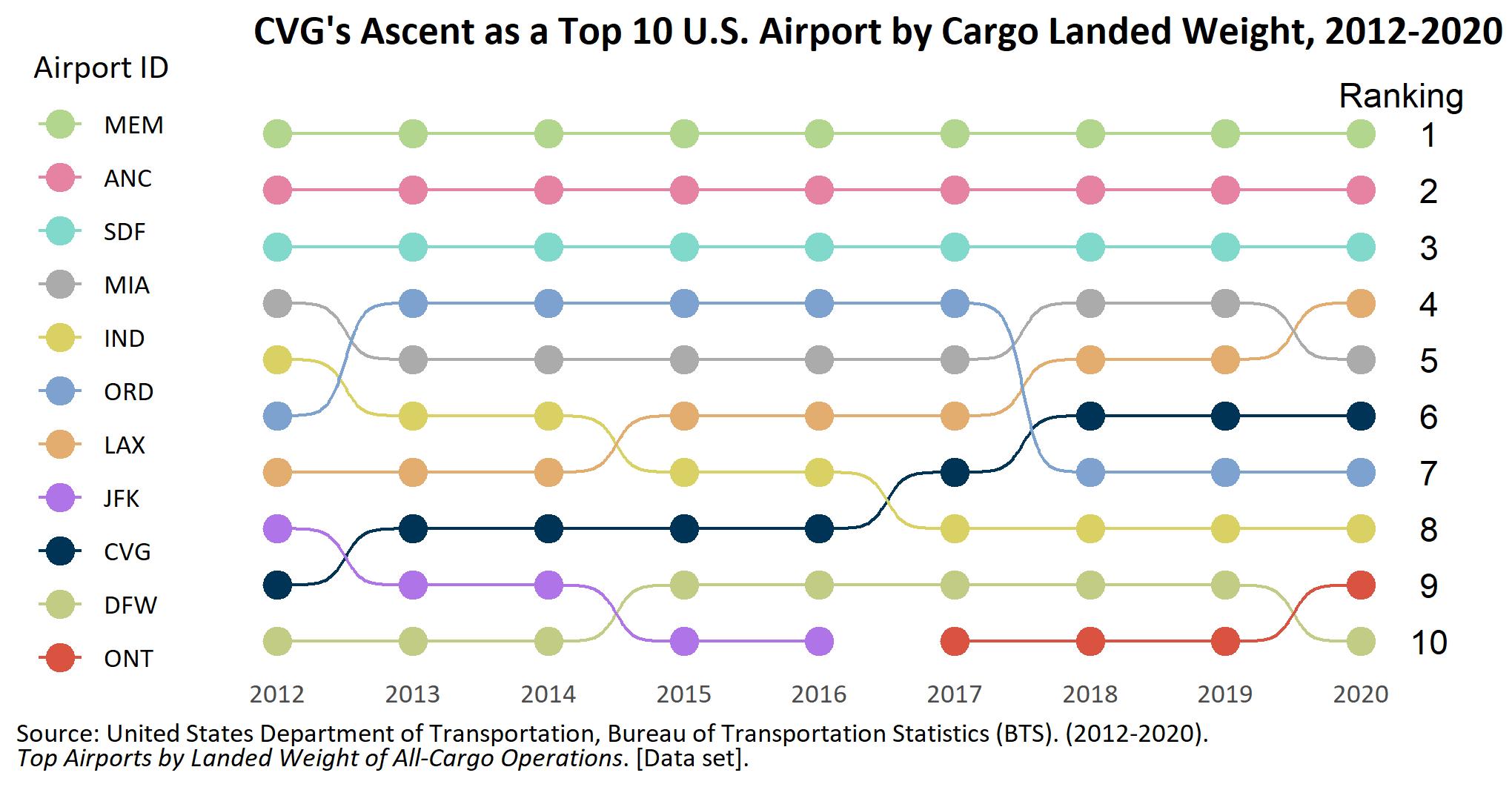 Discussion so far has focused on CVG’s total tonnage or volumes as collected by CVG, a private firm (ACI), and the U.S. government (FAA). Each uses slightly different definitions and yearly reporting times to present this data. However, CVG is the Cincinnati/Northern Kentucky INTERNATIONAL Airport, so another way to analyze air cargo is to break it down and separate domestic freight from international. Using ACI’s annual tonnage records, it is very clear to see that most of the freight handled by CVG is domestic. Since 2013, 66 percent to 72 percent of CVG’s total tonnage has been domestic. This domestic air cargo dominance is an air cargo hub fundamental characteristic also shared by CVG’s two U.S. sister hubs, Memphis (FedEx) and Louisville (UPS).

CVG maintains a database for the value of air cargo that is based on customs brokerage documents for the Port of Cincinnati, which is predominantly composed of CVG freight traffic. This cargo value data does not correlate with other data used in this Freight Plan. It is only a part of all international air cargo transported at CVG; however, it is the best source for providing a sense of the value of international air cargo being imported and exported through CVG. The recorded 2020 international tonnage for the Port of Cincinnati is 114,000, which represented more than $14 billion dollars.

More than 200 countries serve as trading partners with the Port of Cincinnati at its CVG location. In 2020, the Port of Cincinnati’s top international trading country by total import/export tonnage was China at more than 30,000 tons, while air cargo shipments to and from Ireland were most highly valued at more than two billion dollars. Once again, this data does not represent all international air freight at CVG; however, its intent is to provide some insight into the amount, value and global markets where imports and exports at CVG are traveling.

Lastly, what are the goods comprising all this tonnage and value traveling through CVG? Air transport is the most expensive option for moving freight due to the fuel used by aircraft and speed at which shipments can be made. Air also has obvious size and weight limitations. Given these factors, common air cargo items include electronics, pharmaceuticals, perishable foods, and just-in-time (JIT) manufacturing and retail replenishment, including automobile parts and seasonal apparel. Glass and Glassware top the list of CVG’s most commonly exported commodities based on total tonnage. All air cargo goods demand speed, reliability and safety for their delivery to be successful.

A runway length greater than 8,000 feet is needed to sufficiently accommodate larger freighter aircraft that would likely be flown by an all-cargo carrier using an airport facility for a hub operation. Such an airport would also include package-sorting facilities rather than straight transfer of packages to trucks. Other factors that would influence the selection of an airport as a hub for air cargo could include nighttime air traffic control; available land on or surrounding the airport for sorting facilities; roadway access to the interstate system; and environmental measures such as noise control. Once again, at the present time, CVG is the only airport in the OKI region that possesses all the necessary assets for a premier air cargo hub operation. As of March 2021, CVG property included 890 acres developed by cargo hubs. Lunken Airport is completely built out with no remaining space/acreage available to expand runway length or create additional aircraft storage.

All this air cargo growth has led to a near doubling in CVG revenue from air cargo landing fees. Landing fees are paid by cargo airlines for the use of airport runways, facilities and services. A dip in landing fee revenue in 2014 and 2016 was due to a change in CVG’s fee structure.

In 2019, CVG partnered with the Economic Center at the University of Cincinnati and the Center for Economic Analysis and Development at Northern Kentucky University to estimate the economic impacts of the airport on the Cincinnati Metropolitan Statistical Area (MSA), as a whole, and on the Ohio and Northern Kentucky sub-regions. Although the study includes passenger and freight data, it confirms CVG’s status as a lead economic driver for the OKI region. With air cargo dominating activities at CVG, the study’s findings provide further motivation to maintain and maximize this invaluable freight asset.

in total economic output in the Cincinnati MSA

total jobs within the Cincinnati MSA