Pipeline systems are the safest means to move gas and liquid products. In 2006, the federal government signed into law the Protecting Our Infrastructure of Pipelines and Enhancing Safety (PIPES) Act. This act created the first policies for managing the nation’s pipelines to increase safety. The federal authority for pipeline safety is the Pipeline and Hazardous Materials Safety Administration (PHMSA) of the U.S. Department of Transportation (USDOT). PHMSA’s Office of Pipeline Safety is responsible for regulating the safety of design, construction, testing, operation, maintenance, and emergency response of U.S. oil and natural gas pipeline facilities. As a public entity, PHMSA’s sole mission is to improve industry performance and communications to prevent hazardous material transportation incidents, accidents, injuries, and fatalities. OKI shares this goal as part of our freight transportation planning activities.

Pipeline operators are mandated to report pipeline data in accordance with Title 49 of the Code of Federal Regulations Parts 191 and 195, which deal with pipeline safety. PHMSA has collected pipeline incident reports since 1970. Over the years, it has changed its reporting regulations and forms several times. However, sufficient similar data is available to compare pipeline safety conditions for the decades 2001 to 2010 and 2011 to 2020. Using this data, we can see what changes have occurred over the past two decades in the OKI region.

Although pipelines are found in all eight OKI member counties, most people are unaware that this vast network even exists. This is due to the strong safety record of pipelines and that most are underground. In the OKI region, only river transport has had a better safety record than pipeline within the past decade.

For the past 20 years, Dearborn, Indiana, is the only county in the OKI region to not have experienced a single serious pipeline incident. However, over the last decade, Boone, Clermont, Kenton, and Warren counties now join Dearborn for having no pipeline safety events between 2011 and 2020.

A closer look at the region’s number of fatalities and injuries from pipeline incidents reveals a 67 percent reduction over the past decade for both, whereas the U.S. has only seen decreases of 22 percent and 4 percent, respectively. Fortunately, since 2011 only two pipeline incidents, both in Butler County, have required a public evacuation. Our region’s only pipeline-related fatality was in 2013 when a gas meter was damaged during a fire inside a privately owned building. The fire melted the dial face of the meter causing an unintentional release of gas.

Total property damage costs are also reported by pipeline operators on incident reports filed with PHSMA. This amount includes the cost of material, labor, and equipment to repair or replace the damaged property. But it does not include the value of any commodity lost or fittings used during repair, which become permanently attached to the system. Once again, comparing the past two decades, the OKI region witnessed a 24 percent fall in total property damage costs from pipeline incidents, while the U.S. saw a slightly smaller improvement of 19 percent.

During the last two decades in the U.S., 91 percent of incidents were related to gas pipelines, while in the OKI region it was 71 percent in that time. That a large majority of incidents are gas pipeline-related is most likely from a greater majority of pipelines carrying gas products. For natural gas pipelines, the greatest risk is associated with fires or explosions caused by gas ignition, which can cause significant property damage, injuries, and death.

The majority of serious pipeline incidents in the region and country are the result of improper or unauthorized digging near a pipeline.

Reviewing pipeline incidents over the past decade shows that 67 percent were caused by excavation or outside force damage that involved objects, such as vehicles and equipment, hitting the buried pipe. According to Pipeline and Hazardous Materials Safety Administration, this is the most common cause of pipeline incidents. Improper or unauthorized digging near a pipeline can be prevented by contacting publicly available Call Before You Dig! centers before any excavation, so that underground pipeline locations can be marked prior to any ground disturbance.

Over the past 20 years, only two incidences involved poor or faulty pipeline conditions. These two incidences were attributed to pipeline material composition, a weld, or an equipment failure. In accordance with 49 CFR § 192.703, each segment of pipeline that becomes unsafe must be replaced, repaired, or removed from service. 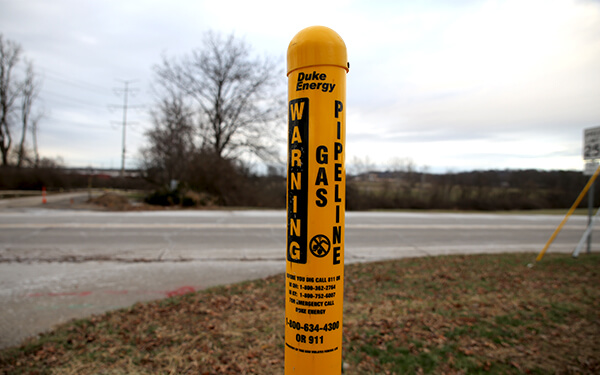